Greedy corporations do not cause inflation. This is the case despite the claims of many on the political left who have failed to understand the very basics of economic supply and demand.

Here is the basic argument of those pushing for a more socialist program:

“Greedy corporations cause inflation by driving up prices and making record profits.”

For the majority of Americans who are now getting their “news” social media, the uneducated masses now have a new target of hate for their financial troubles.

The problem, as with many stories that anger Americans on social media, is that it is blatantly untrue.

“One only has to reason about the claim to discover the absurdity. If companies can raise prices willy-nilly and enjoy ‘excessive’ profits, why don’t they do it all the time? Are companies suddenly got greedy in 2021? And why did the Federal Reserve spend a decade worrying that inflation was “too low” as it struggled to reach its 2% target? wasn’t there enough corporate greed before coronavirus?”

When you think about it that way, it’s obvious that something else happened.

Always and everywhere a monetary phenomenon

When it comes to inflation, many parlor economists are quick to quote Milton Friedman.

“Inflation is always and everywhere a monetary phenomenon.”

The problem is that there is much more to Friedman’s statement about the cause of inflation.

“It is always and everywhere the result of too much money, money growing faster than production. Also, in the modern age, the next important step is to recognize that today governments control the amount of money so that as a result inflation in the United States takes place in Washington and nowhere else. Of course, no government, any more than any of us , do not like [sic] responsibility for bad things.

Milton Friedman’s statement is supported by the chart below of the comparison with (with a 9 month lag).

You can watch Milton’s entire speech at “Money and Inflation”

The government caused it

The quantity theory of money states that prices vary in proportion to the money supply. This relationship is based on the following assumption:

“The value of transactions made in an economy is equal to the amount of money existing in that economy multiplied by the number of times the money changes hands (i.e. the velocity of money). This assumes that the velocity of money is relatively constant and that the growth of the money supply is in line with the growth of economic activity. This implies price stability. On the other hand, if the money supply grows faster than economic activity, this generates upward pressure on prices, i.e. inflation. 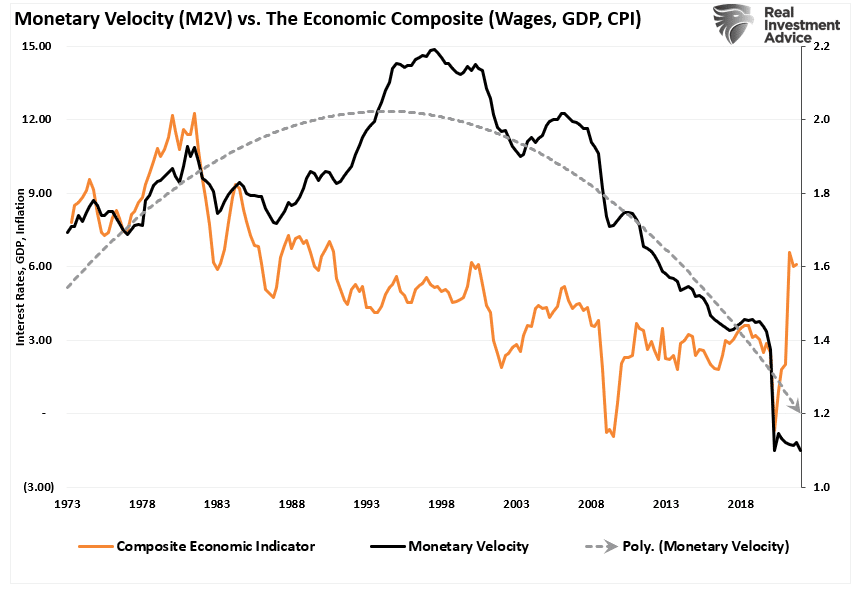 Unsurprisingly, the massive increase in money supply that flooded the system over a “economic shutdown” created a glut of demand in the face of limited supply. With consumers on the edge of “free capital” to spend, there was no production available to provide the necessary supply. With too much money for too few goods, inflation was the inevitable result.

“As the stimulus hits consumers, they spend it quite quickly, leading to a ‘sugar rush’ of economic activity.”

Now this cycle is beginning to reverse as supply increases and demand weakens. As noted in

Stimulus payments to US households evaporate from $2.8 billion in 21 to $660 billion, and there is no excess savings buffer with a rate at 6.9%, lower than 7.7% in 2019). There is a huge inventory build-up of retail products (non-automotive), while the next US consumer weakness is the most likely catalyst for the consensus GDP/PSE cuts.” 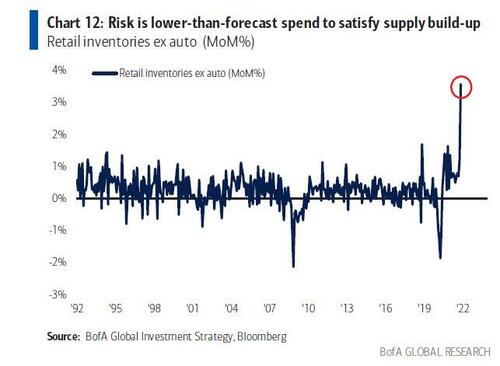 The risk is lower than expected

Of course, this reversal of the “Government printing office” is problematic, economically speaking. 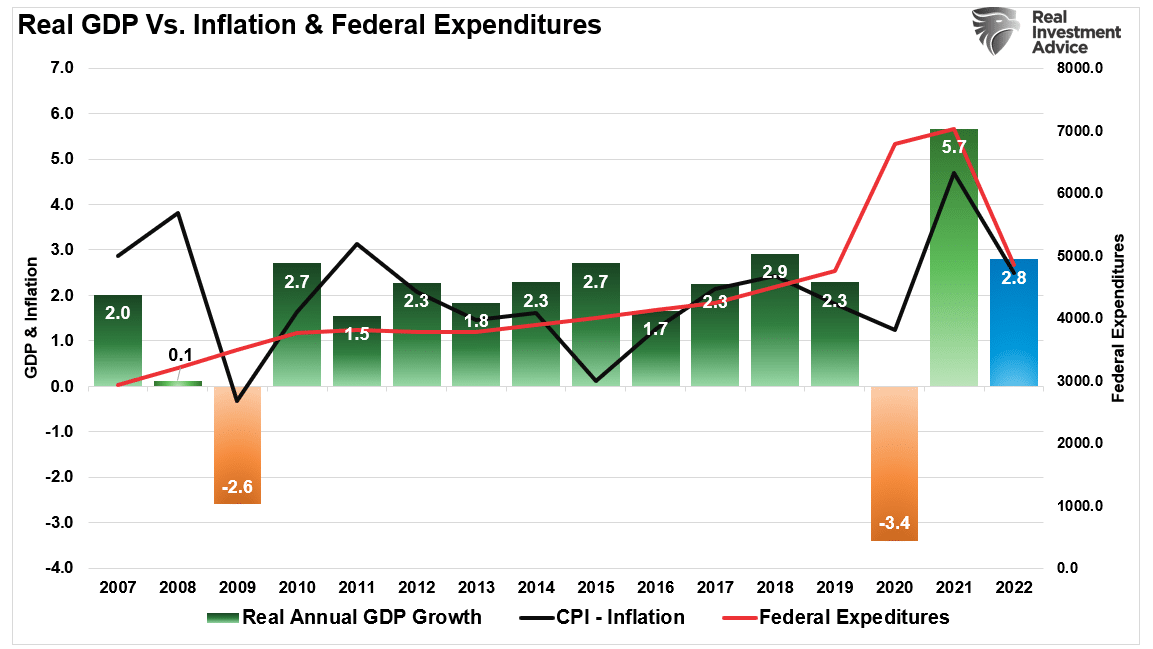 GDP vs CPI vs Fed Spending

However, there is a cure for inflation.

Inflation is cured by high prices

There is an old axiom that “the cure for high prices is high prices.”

While the Fed plans to raise rates to stifle inflation, if it does nothing, inflation will eventually heal itself throughout the normal business cycle. With the massive deluge of government-provided cash now being used up, disposable income is shrinking, limiting . Unsurprisingly, over the next 12 months, inflation will return to the long-term trend of 2% annualized. 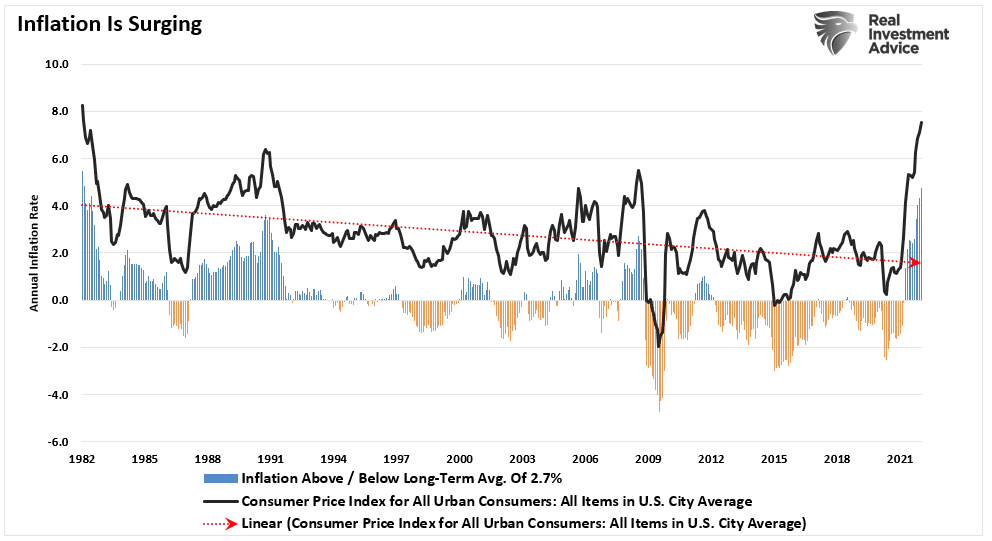 However, this return to inflation will happen more quickly as the Fed raises rates. The problem for the Fed is that each successive monetary policy cycle requires fewer rate hikes before something breaks economically. 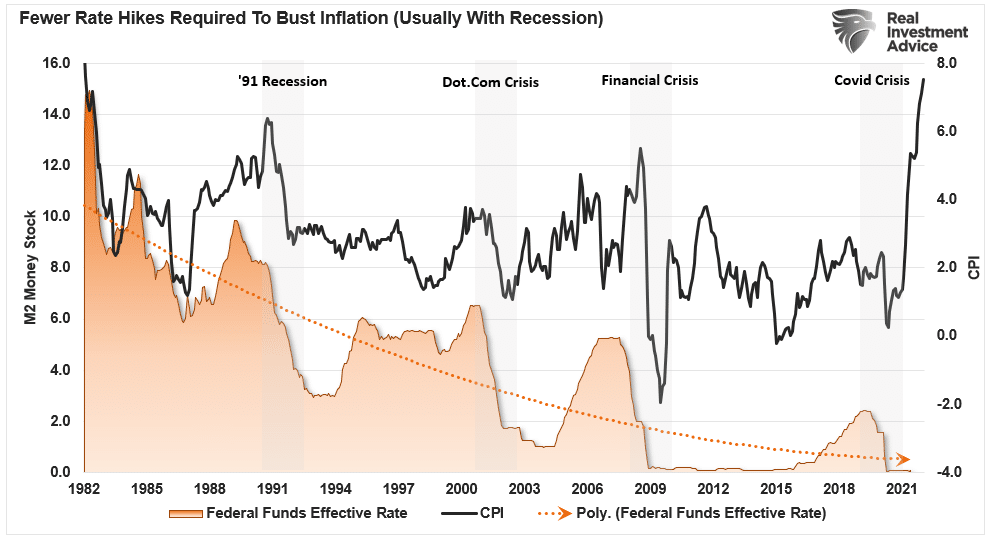 Notably, as shown below, have risen much faster than consumer prices. Such sights as those “greedy societies” absorb input costs, which ultimately hurts their profitability. There is a strong correlation between corporate profits and inflation. 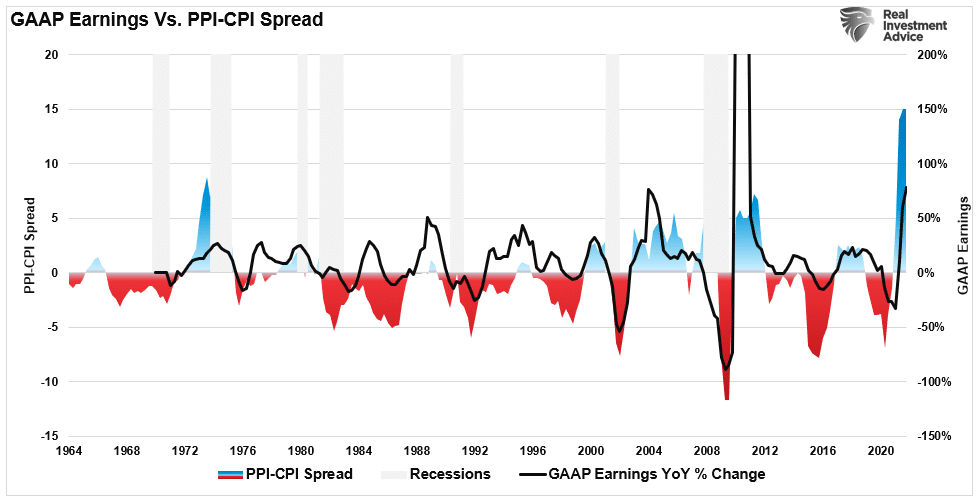 Inflation, especially in 2022, is a function of the increase in money supply from government injections directly to households. There was too much money for too few goods, and inflation was the consequence.

“The truth is that the Federal Government needs inflation. It depends on the Federal Reserve printing money to support its borrowing and spending budgeting strategy. Without the inflationary activity of the Fed, the Government couldn’t fund his habit of out of control spending But the politicians don’t want you to know they’re taxing you on inflation so they perpetuate all kinds of inflation myths to try and make you feel better.”

The average person is particularly susceptible to the myth of the greedy corporation. Given that people are already suspicious of big business, are inundated with misinformation on social media, and have little understanding of economics, this is not surprising. People, like Elizabeth Warren, exploit the weak-minded to promote their own political agenda.

“If you hear someone blaming inflation on greedy companies, that indicates they don’t understand inflation. Or they are lying to you.” – Maharey

If it’s a politician running for re-election, it’s probably the latter.